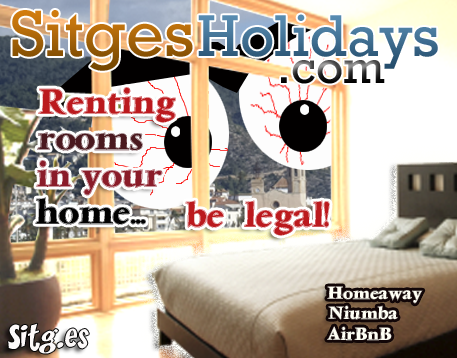 Catalan Generalitat to regulate on ‘renting rooms in private homes’

ALL INFO SUBJECT TO CHANGE : NO RELIANCE ON THE INFORMATION

UPDATE:
Barcelona’s deputy mayor of urbanism Janet Sanz, appears to have signaled that renting rooms in your home via AirBnB, is not illegal
(subject probably to the limitations put on whole properties when rented via AirBnB : the council promises more clarity soon).

Largely it appears… the renting of whole properties is their primary concern, hence the need for a tourist licence or the restrictions in some areas, to get one.

SKIFT QUOTE JANET SAYING:
On residents occasionally renting their space,
“There is no regulation in this moment. It’s not illegal”
skift.com/2017/08/03/barcelona-overtourism-airbnb-and-short-term-rentals/

As a reaction to the growth of Airbnb, Homeaway, Niumba

The Department of Enterprise and Employment presents a draft decree, which will take 5 to 8 months to happen.

A form of housing that was illegal & unregulated, in some autonomous communities, including Cataluyna
(national rules were missing from the Urban Leases Act of 2013)

To embrace new emerging forms of tourism, such as the so-called ‘Bed & breakfast’, ‘dormitories’ or ‘RV areas’

ALL INFO SUBJECT TO CHANGE : NO RELIANCE ON THE INFORMATION

Photos of events & locations in Sitges